OFFICIAL R.CRUMB SITE IS ADMINISTERED BY ROBERT CRUMB AND ALEXANDER WOOD OF WILD WOOD SERIGRAPHS ALL ARTWORK IS COPYRIGHT ROBERT CRUMB UNLESS OTHERWISE NOTED
Home > About Crumb > About The Crumb Print Editions > Arcade

Crumb's comments from the Certificate of Authenticity which accompanied the Arcade No.2 serigraph in 2005 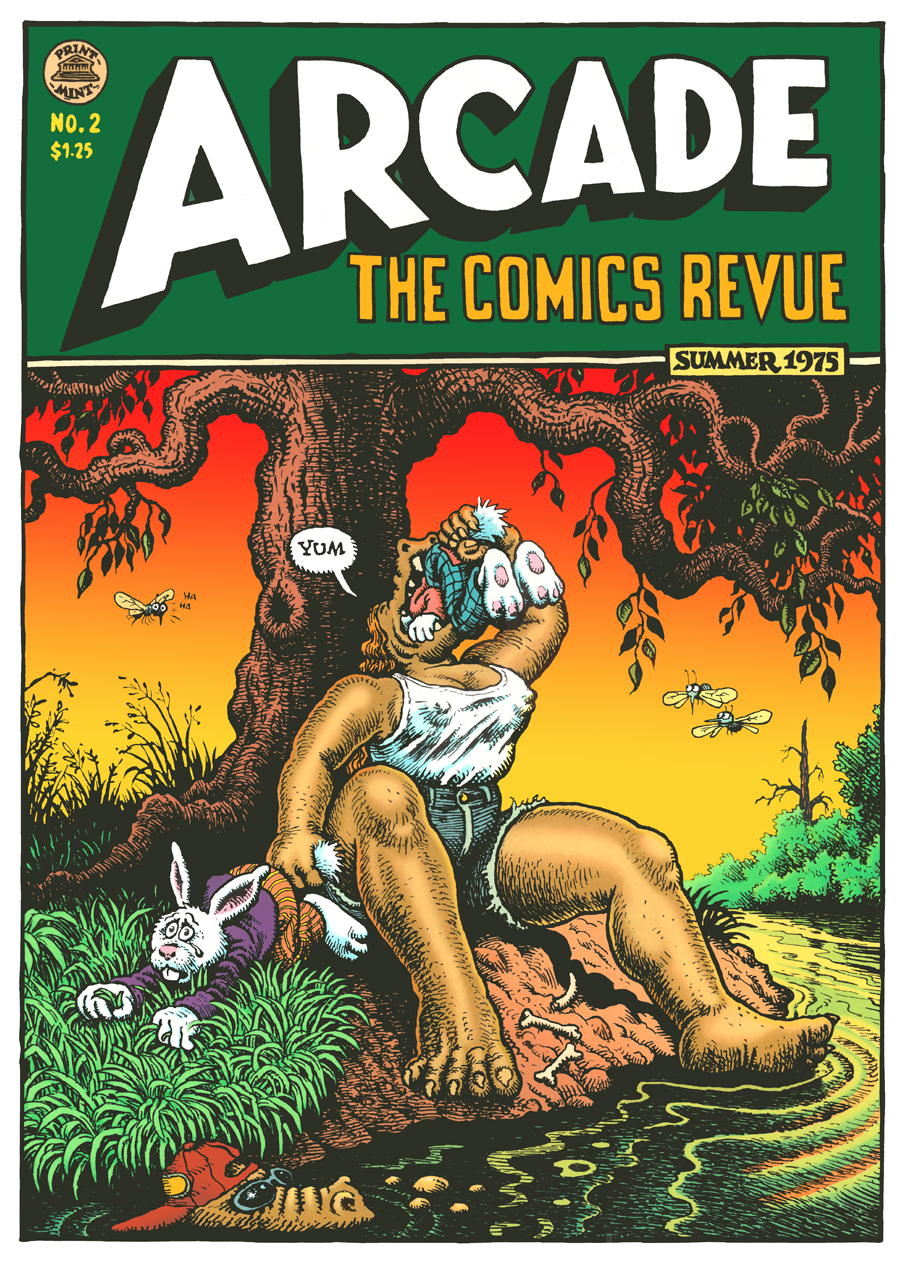 This drawing was originally made in 1975 for the hopeful magazine venture Arcade, started by Bill Griffith and Art Spiegelman in an attempt to pull together the rapidly disintegrating "underground movement." They worked very hard to make Arcade a success, tried to give it a professional look, with a contents page and even page numbers. But after seven issues over a period of one and a half or two years, they threw in the towel. They wanted me to do the covers thinking that would help sell it. I did five of the seven covers. Then a couple of years ago, I reworked this cover slightly, to be used on a French anthology of my work called R.Crumb's Amerika. I added some drawing to the top and bottom of the image to fit the more elongated proportions of the French cover. The alligator wearing the ball cap and shades at the bottom did not appear on the "original" Arcade cover. Plus, whenever I reuse old artwork done long ago, I can't resist the urge to do some technical upgrading, improving minor details, having learned a few things over the decades.

The publisher, as well as the printer, of this print, Alex Wood, with whom I worked closely for many years in the making of these silk screen prints, initially had concerns with the choice of this image for a print when he first discussed it with my son Jesse, who also works with Alex on the details of these print projects. Alex thought that, regardless of whether or not it is a graphically strong image, the subject matter, the terrible plight of the two poor little bunnies, was too painful to have hanging on the wall of your living room, seen every day, it was much too disturbing.

Alex has a point there. The counter-argument put forth by both Jesse and me is that these prints, published in small quantities, and, you know, kind of expensive, are purchased by mostly by your dedicated Crumb connoisseurs, and that these individuals, a quirky, eccentric lot for the most part, don't mind the "dark" content, maybe even like their graphic imagery rough n' tough. Jesse probably knows this audience even better than I do. He has the eye, and he doesn't think it's a problem at all. For me, well, all I can tell you is, in the creation of drawings such as this, I was not thinking much about who would like it and who wouldn't. I usually went ahead and let the murky depths of myself spill out onto the paper, for better or worse. I know a lot of people didn't like it, that it was not for everyone. I had long since written off the mainstream, the greeting card public. Even among the cultured elite, I know that most of them found my work largely ugly, repugnant, digesting, sexist, racist, etc., etc. So who's left? I've met many of them; an odd, unlikely scattering of individuals, impossible to generalize.

Alex is worried about getting stuck with a lot of unsaleable prints. So, there's a gamble with this one. It will be interesting to see if his anxieties are justified or not, God love 'im.

Many years later, I would like to finally say that it was I who proposed this image as an edition. It's true, I  proposed it with reservations, but since I loved the image so much, I did want to publish it. It turned out to be one of the most beautiful editions I ever screen printed. That's one of the reasons why the giclee prints look as fantastic as they do.