Crumb's comments from the Certificate of Authenticity which accompanies the Bijou No.6 serigraph printed in January 2013 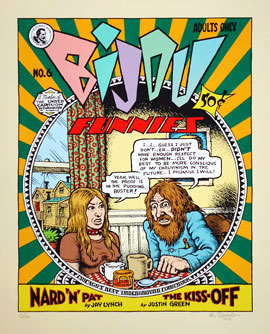 It was 1971. I knew these two “chicks” who shared an apartment on York Street in San Francisco. These two were on the loose, wild, promiscuous. I used to go over there when I was in town and fool around with both of them.  I was such an “asshole” at that time. I admit it. I had my little rinky-dink notoriety in the hippie subculture because of my “underground” comics. The comics didn’t make much money to speak of. I was still receiving welfare from the State of California. But glory be, money didn’t matter to those hippie ladies. Everybody scuffled and got by somehow. I had an in with the girls because of my “cool” LSD-inspired comics, which gave me some little caché in the hippie subculture.

I would show up at their place and plop myself down on the raggedy sofa and smoke some pot with whoever was hanging out there at the time and freely maul the nearest attractive female.

Any apartment where two or three girls were living together was constantly being invaded by young males on the prowl, including me. With little or no courtly preliminaries I would impudently assault any young, luscious girl flesh that happened to be in the room. Sometimes they would just as casually push me off, sometimes not. It was “hip” at the time to be sexually permissive, but if they spurned my advances I would back off. I was a “sensitive” male. I was not a rough hard-ass. I gave off no vibes of menace. I never forced myself on them or committed what’s now called “date rape.” I was “playful.” I liked to horse around. I liked big, strong girls and would climb all over them, push them down and go for a ride on their butt, stuff like that. It’s amazing now to remember how often the young girls I knew put up with my shenanigans. Maybe they liked it, I don’t know. Sometimes this horseplay led to sexual intercourse, sometimes not. Toward evening it was assumed that the girls would throw together some kind of dinner. They usually did, in fact. As for helping out in the kitchen, or helping with the cleaning or fixing broken appliances or anything of that sort, it never entered the minds of “sensitive” males like me. Sometimes I would leave their house, either alone or with one of my buddies, and venture forth to some OTHER apartment somewhere in the city, where a couple of OTHER “chicks” lived, to see what sort of action we might get over there.

Then along came feminism.  This movement began to sweep across hippiedom circa 1970, ’71.  That’s when, instead of crying fits, craven begging or sullen silence, we started getting lectures and scoldings. Thus the scene on the Bijou Funnies cover. This is a scene from real life -- my life. The background is the York Street apartment, drawn from memory. “The proof is in the pudding, buster” was a line delivered by one of those girls who lived there. I really said those things the guy is saying, after being told just what a jerk I was. She had joined a new feminist discussion group. Her eyes had been opened. Just because you were a hip young woman, you were not obliged to “put out” to every guy who “came on” to you, nor make dinner, nor let good-for-nothing foot-loose hippie boys loll about your place for days on end without lifting a finger to help out or even buying any groceries. Those days are GONE! It’s OVER! It was truly a sobering change in business all around -- generally for the better. It produced an improvement in male character and attitude, I think. Sure there was some excessiveness and overreaction in that early feminist movement. I came in for a lot of shit from feminists in those days because of the crazy, violent sexual content of my comics. My feelin’s was hurt, I felt deeply misunderstood, but, yeah, I was a “male chauvinist” asshole. Ah, those were the days.