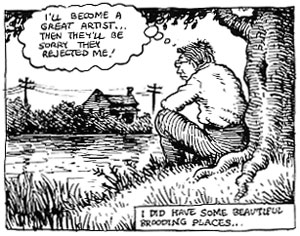 Robert Crumb was born in Philadelphia on Aug. 30, 1943, to a Marine father and Catholic mother. His family moved frequently during his childhood, and moved to Delaware in 1956 when his father retired after twenty years in the U.S. Marine Corps. Robert’s mother often behaved erratically and was probably manic depressive. Robert was a faithful Catholic until he was sixteen. His biggest influence during his youth was his older brother Charles, who loved comics and who co-wrote many of the comics they produced as children. Crumb was anything but popular in high school and felt alienated.

“I was one of those social rejects, but then, you know, a lot of people were — nothing unusual about being an outcast in high school.”