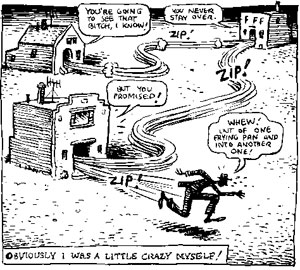 In January, 1967, Crumb suddenly left Cleveland. “I escaped to San Francisco when I met two guys in a bar who said they were driving west.” Dana followed him there, and they eventually settled in Haight-Ashbury. Crumb drew “Zap #1” and “Zap #0” in the fall of 1967 and sold them on the street in 1968 (out of Jesse’s baby carriage).  So marks the birth of underground comics with Crumb as its most recognizable force. His son Jesse was born at this time, in April, 1968.

Robert continued to draw and travel throughout the rest of the decade.

“I was all over the map in ’69. I didn’t spend much time home. I was chasing women all over the place. I lived for a while in a hotel on Mission Street. That’s where ‘Big Ass’ and ‘Snatch 3’ were done. I was so mixed up. I stayed a couple months with Gilbert Shelton and a gang of Texans in Venice, California. I was in Detroit, Chicago, New York. It’s amazing I managed to turn out so much work in that chaotic time.”