OFFICIAL R.CRUMB SITE IS ADMINISTERED BY ROBERT CRUMB AND ALEXANDER WOOD OF WILD WOOD SERIGRAPHS ALL ARTWORK IS COPYRIGHT ROBERT CRUMB UNLESS OTHERWISE NOTED
Home > About Crumb > Biography > The 70s 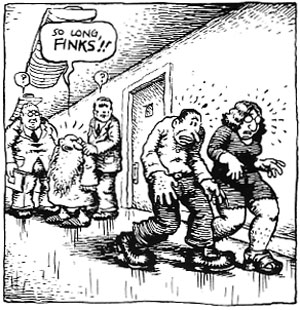 In the first few years of the decade, Crumb continued to traverse the country and draw. But by 1974, Crumb moved from what had become a commune in Potter Valley and settled down in Madison, California with his new girlfriend, Aline Kominsky (later to become his second wife). He stopped smoking marijuana at that time. He drew a “Mr. Natural” strip which ran in “The Village Voice” for about a year (later compiled as “Mr. Natural #3”). He also started playing banjo and mandolin in the Cheap Suit Serenaders Band, which usually performed in the Bay area.

His revolutionary character Frosty the Snowman (Arcade comics in the mid-seventies) may have brought the wrong sort of attention from the government, because by 1977 Crumb was embroiled in a legal battle with the IRS.