The Making of a Serigraph

Alex from Wildwood Serigraphs reports on his latest project in conjunction with Robert Crumb, a limited-edition serigraph based on the "Heroes of the Blues" card set:

"Robert and I have decided to take on the Heroes blackText the Blues as our next serigraph edition. Crumb selected 25 cards from the 36 in the Heroes of the Blues card set, and is now creating a new masthead for the edition. These are his personal selections for the print:

'Okay, the new layout for the Heroes of the Blues serigraph print is five by five images. The new order will be as follows:

"I am now scanning and color-separating each portrait so I can send the black line only for each card to Crumb in France. A considerable amount of retouching will be necessary to restore the scans as close to the original drawings as possible. The portraits were done decades ago, and the original art was covered with zip-a-tone screens, which were used to color the art. Unfortunately, these also diffused and muddied the black line. Robert has agreed to touch up the scans by hand and restore these wonderful portraits to their original quality." 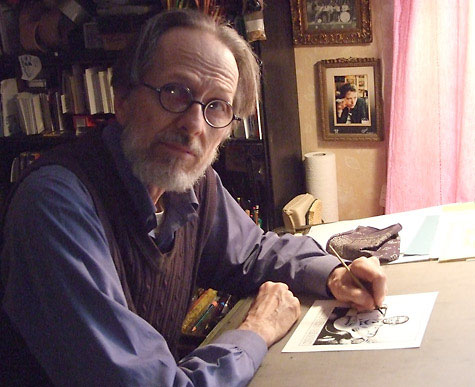 "Since the original art for the cards is unavailable, we need to work with the printed cards. The first step in the long process of creating our serigraph is scanning the cards, cleaning the scans, and deleting the color. Since the cards were printed in a small size, much detail was lost that will need to be restored for our print. Once I have the cleanest possible black line images, I enlarge them and print them out on bristol board at high resolution. I send these printouts to France, where Robert reworks them by hand. He whites out areas that have gotten too dark, and adds black detail and cross-hatching. Robert then sends back the retouched art with color instructions. He has chosen to alter the colors on almost every card. We are reproducing 25 of the Blues Cards for the print, and are now about halfway through this first step." 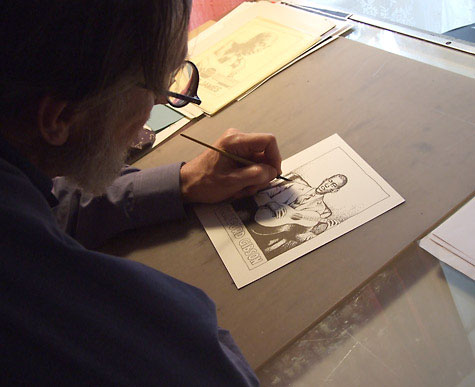 Each image is being reworked and restored by Crumb

"After many weeks of sending artwork back and forth, Robert has reworked all 25 blues cards selected for the serigraph edition. It took him about 40 hours (more than he anticipated) to finish the artwork. He also created new artwork to frame the print a masthead for the piece.

"I rescanned each portrait which Robert sent back to me, and assembled them in the order he specified. Here is a rough of the keyline (black screen) to which I will now start adding color. Color separating this edition will take about as long as the actual process of printing it. 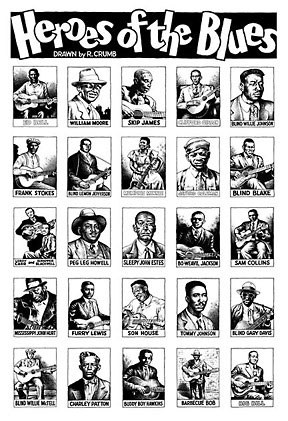 "Not only did Crumb rework the actual drawing in ink, but he also changed the color on most of the cards. Here's a jpeg of one of his color roughs (he created a separate rough for each card) for Peg Leg Howell he reworked: you can see the background is changed from green to yellow; the hat has band around it now; his suit has been changed to blue; the sweater is now multi-colored; the name plate has been changed to orange. I'm in the process of color separating the edition now. But I actually have to start printing the edition as well, so I can see how certain colors are blending and if I need to add more screens to achieve the finished color Crumb specified."

Alex comments on the process of separating and printing the initial colors: 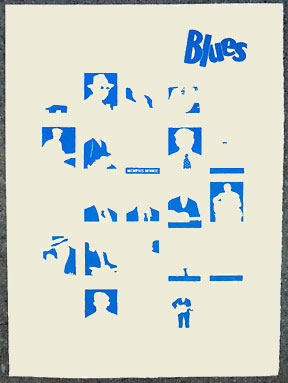 "I decided to print the edition on cream paper and add a different color for the cards themselves later. The first color I'm starting with is process cyan. It may seem odd, but black has to go down last, so it covers all the other colors." 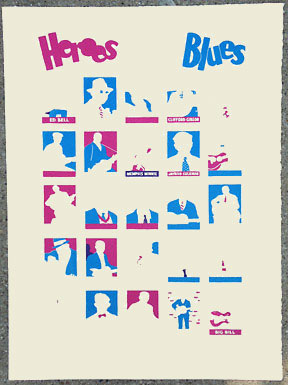 "The second color down is magenta. So far, so good." 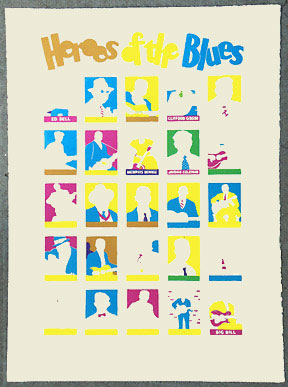 "The third color is process yellow. I'm not satisfied with the orange (the word 'Heroes' in the top left hand corner, for example) created by the magenta covered with process yellow. I'm going to have to figure something else out (with the remaining colors and screens yet to come) to make that orange brighter and more dynamic. That's one reason I have to print while I color separate, as I'm never really sure what I'm going to get when I mix colors." 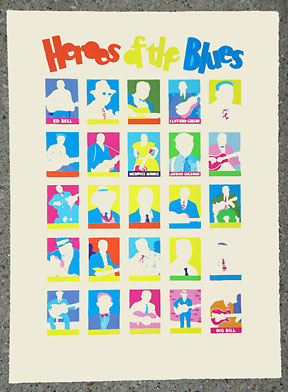 "I went ahead and threw down a nice, bright orange because I was so bothered by that pale, muddy yellow trying to pass itself off as a vibrant orange. So I don't have to worry about that anymore. I put down a light cyan. Then I put down a light magenta. It was a very difficult color, for some reason. I still don't know why that light magenta gave me such a hard time, but I lost several years of my life putting that down. It took forever, and I had to clean the screen at least 4 times. And I lost a lot of prints too. It was terrible. It made me wonder why I got into screen printing in the first place." 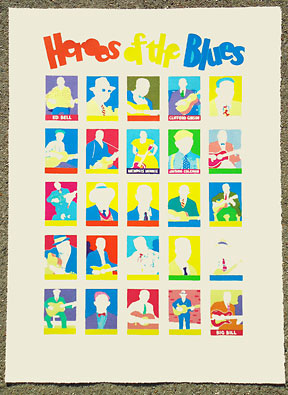 "The most recent color I've printed is light yellow. The registration was perfect on that color, and it's wasn't a problem at all. So now, all my process colors are down and complete, and I'm ready to go into the greys and browns. I've reached half-way point with this edition!" 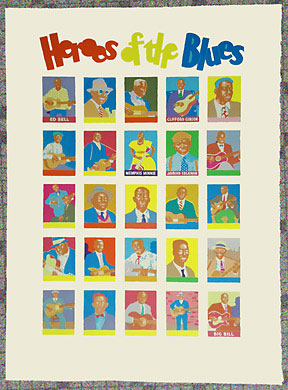 "So now I've put down the browns and ambers for the skin tones. Also the pink of the lips, which is a tricky color: not pink enough, and there's no contrast; too much pink, and they look like they have lipstick on. I think this is just about perfect. Also put down some gray (over a lot of colors) which really helped mute the process color tone. So far so good. I have about three colors left to go before the final black goes down. When that last color goes down, the prints will be ready for approval and signing by Robert." 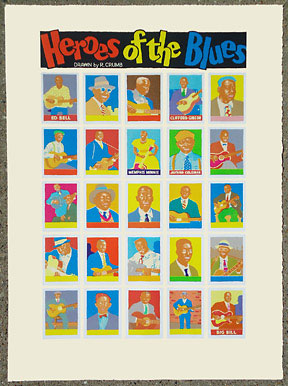 "OK, I've put down some more colors and it's all ready for the final keyline -- Crumb's portrait drawings -- in black. I had to print the masthead with another black screen so I could get good coverage. There's a lot of open space to be covered, whereas the portraits themselves have so much detail, I couldn't really keep the detail and get the coverage with the masthead with the same screen at the same time. So even though they use the same black ink, I had to print the masthead and the portraits separately with different screen meshes. I also had to fix some colors that weren't quite right (did that with light yellow and a light magenta). Also put down the white which is the border of the cards. So far, so good. Tomorrow, showtime!" 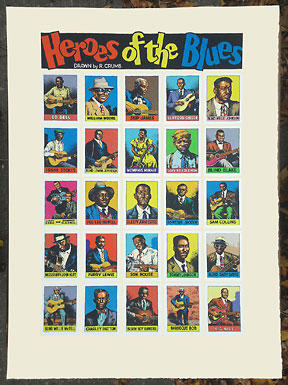 "Here is what the edition looks like with the last color down. It was the most difficult color, because I couldn't get too much coverage or all the cross-hatching would fill in. I couldn't go too lightly or the black shadows wouldn't be solid. I lost about 50 prints doing this last color, so we'll end up with a 150-print edition.

"Crumb is now in Paris, and will be signing the edition there. As soon as he approves and signs the prints and sends them back, we'll announce it on the Newsletter. Should be late September."